Upon inspection I discovered several functions weren’t working.  No Vibrato or Tremolo, no Reverb, whole percussive section was dead. bongos were rather crunchy, synth section (bass pedal) controls weren’t working  and there were about 3 or 4 keys not playing the 16′ register. Not to mention all the switches and pots were properly noisy.

Actual oscillators themselves were in good shape and only troublesome devices were the electrolytic decoupling caps. Following the replacement with new ones signal was much stronger and according to the specs in the manual.

Design is rather simple, it consist of precision foil caps and adjustable coil master oscillator for each note followed by transistor dividers. These circuits are incredibly stable and don’t drift noticeably at all.

I started slowly one by one following the smaller daughter boards and tackle issues one by one.

The further I was troubleshooting individual functions it became apparent capacitors (predominantly the electrolytic ones) are the main cause of all the issues. I have therefore decided to do full recap of the instrument. Pretty much all of the old caps with few exceptions I removed measured really bad ESR or some were actually partly conductive as if they had a resistor in parallel. 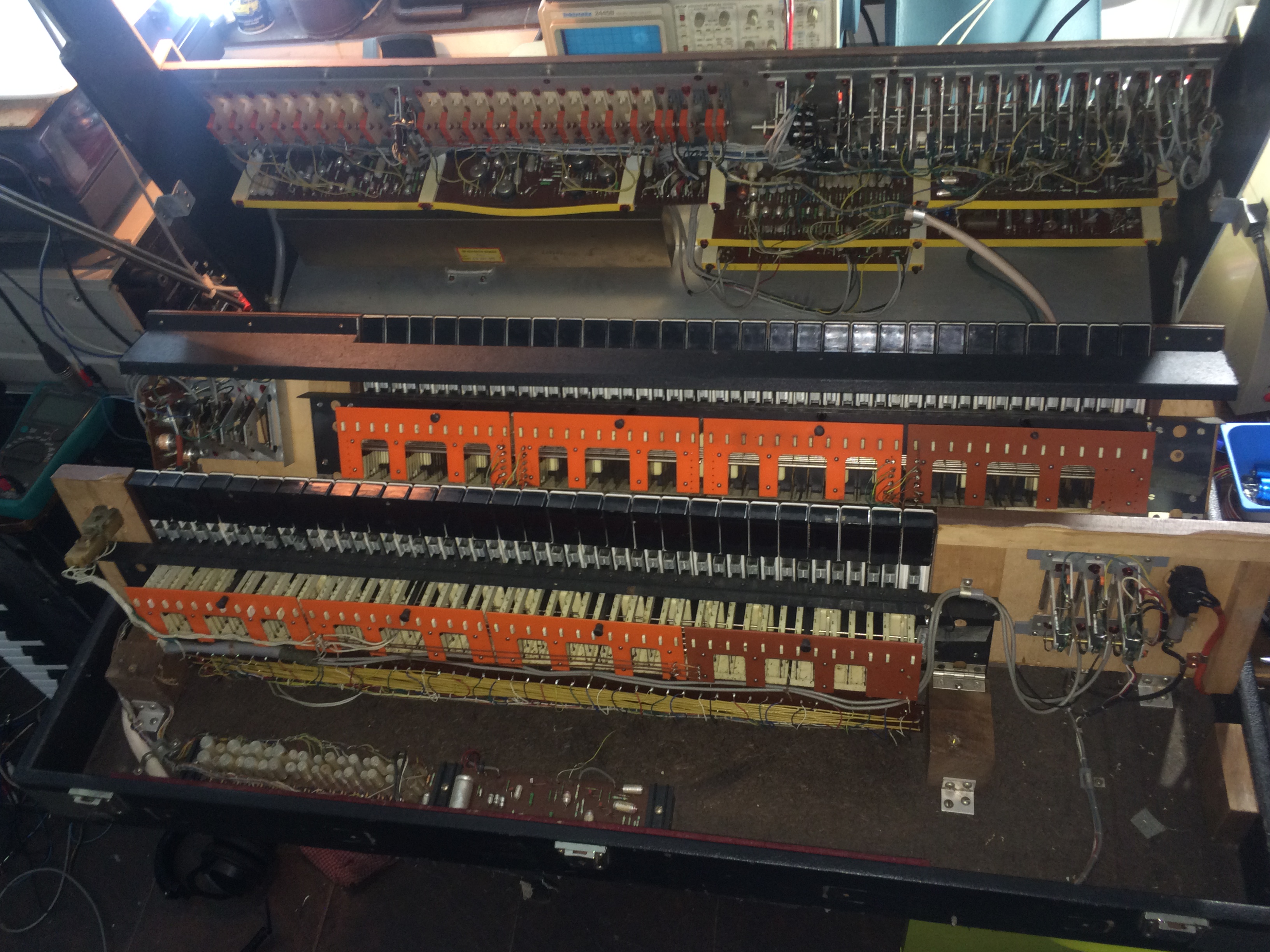 Following the full recap most of the organ functionality was restored, WAH WAH, Vibrato, Tremolo, Bongos, Percussive section to some extend as well and overall signal to noise ratio changed dramatically. Especially top manual was giving really strong signal but the lower manual remained weak and the manual ratio pot had to be pushed all the way towards the lower manual to have any decent balance between the two. Issues with missing 16′ notes remained and percussive section while now working was rather short and the slider made no difference to its length.

One of the missing 16′ notes was due to bad germanium transistor in the divider circuit while the others were due to physical wires not being soldered on properly. There were cold solder joints on two and one wire fallen off completely.

Percussive section just needed trim pot cleanup and re-calibration and all was good.

Broken reverb was purely due to broken off wires from the spring reverb, all was good when i re-soldered them in place.

Now with entire organ working and all functions doing what they should I remained puzzled by the sheer volume difference between top and lower manual. It took me several hours of head scratching just to realize after all that somebody who repaired the instrument before me wasn’t thinking quite right.

Slider pots used by Vermona are of amazing construction. Virtually indestructible and easy to access to clean them. They were clearly designed to be maintained and the tracks themselves are made out of some sort of conductive plastic which doesn’t wear at all. After just a brief wipe with IPA and re-lubrication with fader lube, they are like new. The only weak spot is the track itself is secured to the rest of the mechanism by plastic lugs which ends are melted to secure it in place. These get fragile over time and break which results in the track coming loose. Somebody before me didn’t think quite right and replaced this plastic lug with screw and didn’t think about the need to insulate the nut and bolt. It cause this dual pot to be partly short connected between each other and therefore it was impossible to get the manual balance right. I have used some fiber washers and all was good since. Use of plastic M3 nuts and bolts would be even better, but I didn’t have any at hand. 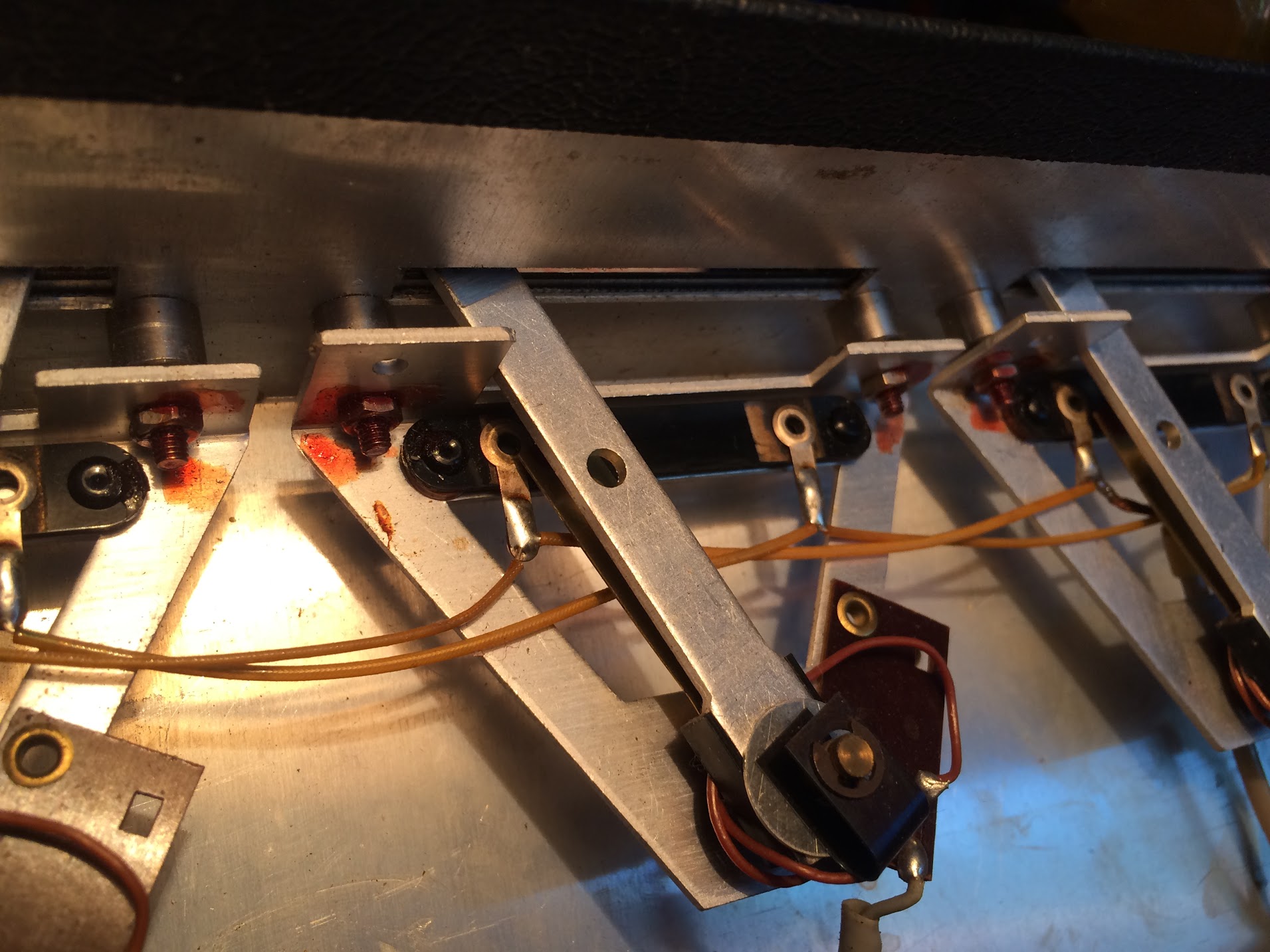 Once this last issue was resolved only left to do was new hinges, locks and handles on the case and this monstrous organ was ready to go back to the customer.

This one came with garbled patches and CPU not properly reacting to the input.

Antares 2 is a rare breed. This Synth was developed in Czechoslovakia in 1979 by VURT (Research Institute of Broadcast and Television) and only few prototypes were ever made. There was one small batch manufactured (<10 pieces) before the project was finally retired.

There were few issues with this particular piece. Mechanical problem with one of the keys and associated damage around the key J wires.

Major problem were the capacitors. I had to replace both the dried up electrolytic caps as well as metalised paper caps and ceramic caps which absorb moisture over time. Following the  cleanup of all the pots and switches as well as full recap Antares sprung back to life.

I’m giving special credit to the mechanical construction of this piece, all the electronics apart of keyboard itself are in one metal enclosure. This can be tilted upwards to allow for better access to the controls.

More pictures are little history in Czech language can be found here.

All the electronics are in 5 modules and use gold plated high quality connectors. The entire PCB section can be also tilted and secured in place using thumb screws allowing full access to all the components.

Real joy to work on. 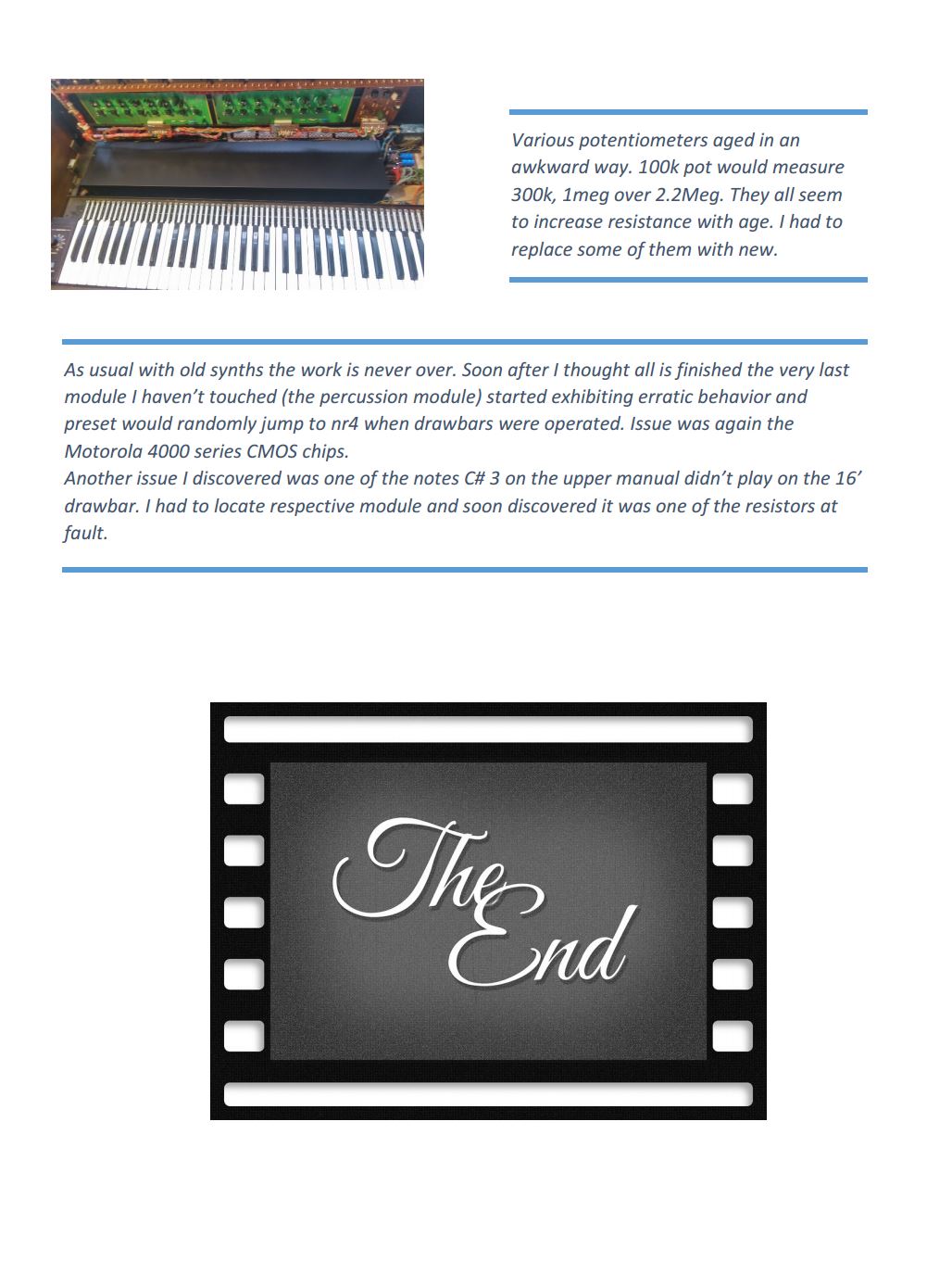 This Ritm 2 only needed pots cleaned and switches lubricated. Great piece of kit. capacitors must have been recently replaced with high quality modern electrolytics.

E-Piano was a bit more complicated repair compared to the Vermona string synth. PSU had dried up filter electrolytics and one of the earth wires fell off.

Following a pot cleanup all was working well except tremolo.

I noticed some of the electrolytic caps were getting warm due to ESR. After the replacement piano was quieter with less strain on the PSU however the tremolo generator still wasn’t oscillating.

Both of the transistors were OK, all the surrounding resistors as well, electrolytes were replaced so the only culprit left were the foil capacitors and indeed once replaced by small electrolytic caps (the only 470nF I had in my spares drawer) tremolo sprung to life. I managed to later replace electrolytics with foil polypropylene condensers and tremolo was much nicer and more stable sounding afterwards.

This Synth came to me following a damage suffered during transport. Joystick was loose /broken and it wouldn’t turn on or even when it turned on it would just display nonsense and wouldn’t react to any of the presets.

The core of the issue was a semi shorted battery and the spring clip from the joystick wedged under one of the PCB’s causing short of some sort.

With battery and the offending spring clip removed all sprung to life and worked just fine when presets were loaded.

I managed to glue the joystick together, but I sourced replacement module in the meantime.

Vintage synth from Eastern Germany, you can smell the communist era inside of it. Very typical earthy smell of brown PCB boards. All it needed to bring back to life was thorough cleanup of all the keyboard contacts and slider pots.  After an hour and a half with compressed air and IPA it’s back in business.

The way this one sound is just pure filth, it’s harsh…….

This was an interesting one, the main issue customer had was with added modification not working. This modification was done sometimes in the 70’s and it took me a while to figure out how the mod was done.

Basically the bottom octave of the pedal had a contacts duplicated to the lowest octave of the bottom manual and one of the BUS wires which used to be associated with one of the draw bars was instead taken externally via additional BASS coil and switch to the extra jack output.

When I managed to resolve this issue with non operational bass there was still fair amount of hum. This was partly because the modification created ground loop. I resolved this by earthing the additional output in the same place as the main out was. This removed some of the hum but there was still fair amount of it left. With ground loops eliminated this had to be caused by the aged electrolytic condensers in the PSU. Following a brief discussion and estimated Bill Of Materials and work involved decision was made to do full recap.

Modules had a mixture of original Mallory american condensers from 1950’s and old TESLA electrolytics from sometime in the 70s.

Since the dual/triple modular caps were not available during the communist era  somebody who did the work in the 70’s installed replacement caps inside the chassis and sadly placed them right next to the power resistors. Such a high temperatures are a recipe for a quick death of electrolytic and that’s exactly what happened. One of them popped and leaked out and the other had also the safety valve popped.

I replaced all the electrolytics throughout and utilized modular caps made by JJ in Slovakia. These are great for typical PSUs of Valve amp designs.